As I digitize them, I’ll be moving my oldest (and often best – at least until after 2013) articles to this location.

Fire On The Mountain (The Independent October 1983)

Memories of a Musical Eden (Spectator Magazine and Bluegrass Unlimited 1984)

The Marrow of Tradition: Joe and Odell Thompson The Independent (April 24, 1991) longer version

The Marrow of Tradition: Joe and Odell Thompson Bluegrass Unlimited (September 1992) shorter but with bonus of Odell’s 1994 funeral program

About Folk Alliance for Dirty Linen 1991 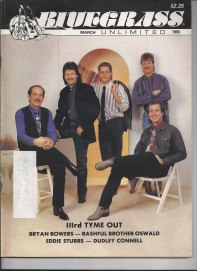 Jim and Jesse Liner Notes for Music Among Friends (Rounder, 1992)

Finding the Roses Among the Brambles: The Lynn Morris Band (Bluegrass Unlimited October

The Beginnings of IBMA International Bluegrass 1995

This site uses Akismet to reduce spam. Learn how your comment data is processed.