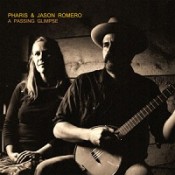 From British Columbia, Pharis & Jason Romero offer a tastefully understated and dependably captivating set of original and classic old-time and roots music on the outstanding 2011 release, A Passing Glimpse. Little wonder it hit the top of the Folk-DJ chart last fall. Including their stint as 2/3 of the Haints, A Passing Glimpse marks their third release. Jason has long been noted as a top open back banjo builder, while she was a member of roots ensemble Outlaw Social.

The title track is one of five strong songs penned by Pharis, but the true beauty of A Passing Glimpse is how seamlessly the originals blend with the carefully (I have to assume from the results) chosen covers. Wearing your influences on your sleeve proves a virtue in old-time music. Pharis and Jason touch all the right basis, pulling from the Carter Family (“Engine 143”), Karl & Harty (“I’m Just Here to Get My Baby Out of Jail”), and lesser known Uncle Dave Macon (“Hillbilly Blues”). On the other hand, the Romeros show their open ears and ability to apply their old-time method liberally with the Rambo’s pop-gospel hit “It’s Me Again Lord.”

A Passing Glimpse finds the couple paired down to focus on their singing and his playing. They have thus produced a gorgeous, ethereal set that is powered by its restraint. Pharis and Jason thus manage to sound fresh and old simultaneously, connecting 2011 to 1927 in a most soulful way.

This site uses Akismet to reduce spam. Learn how your comment data is processed.